The only thing scarier than a computer virus with the power to destroy your system or steal  all of your precious data stored on it  are viruses that do so while coming in packages that are scary onscreen as well. In honor of Halloween, here are the scariest-looking viruses of all time. Most hark back to the days of DOS, when computing was simpler and viruses were written for self-expression, not financial profit. And not all of these were extremely harmful, but if you saw them in action you know just how chilling they were. 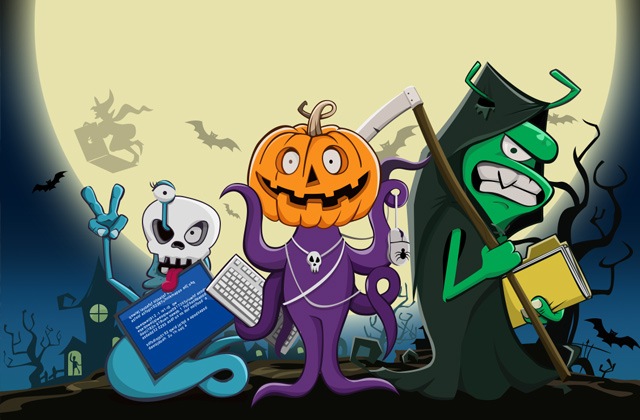 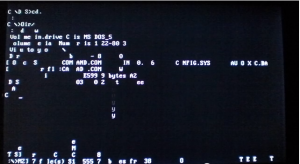 Not much is scarier to a user than watching their system literally fall apart. That’s what the Cascade virus did in the late 80s and early 90s. When installed, it would cause characters in DOS to drop to the bottom of the screen, rendering computing useless while it was doing that, a process it repeated periodically. It also seems to have inspired an episode of “Star Trek: Voyager” that featured a computer virus by the same name. 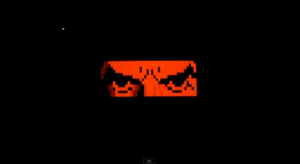 This DOS virus wasn’t terribly damaging but it produced the startling image of a red-faced man’s narrowed eyes, then displayed the text ‘Nothing can save you here, friend – you’re in my world now.’ Attempts to remove it prompted ‘I’m watching you’ scripts, but ultimately the virus itself had little bite. 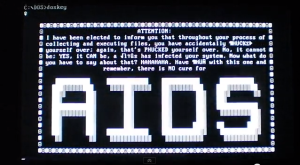 This was one of the more tasteless — and, yes, frightening — programs ever. Another early ’90s DOS infection, it took over the user’s screen and, after a long and profane welcome message, informed them in very large lettering that their system had been infected with AIDS. The system had to be rebooted at that point, and the infected .COM files had to be deleted and replaced to eliminate the virus. 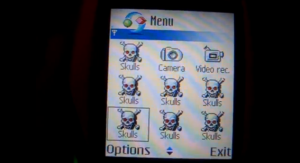 This Trojan attacked the Symbian mobile OS, which was the most popular one back to 2004.  Disguising itself as a phone decoration app, Skulls acted by replacing icons on the screen with skulls-and-crossbones images and rendering standard applications unusable. So Kaspersky Lab experts lawfully called this malware “Vandal Trojan”. Skulls  was an early version of the now-widespread mobile malware, and it was certainly frightening.

Tequila infected .exe DOS files. Once resident, the fourth execution of any infected system produced a crude Mandelbrot fractal image — a graphic representation of a type of mathematical set — with a prompt that, when followed, produced this joyous message: “… T.TEQUILA’s latest production. Contact T.TEQUILA/P.o.Box 543/6312 St’hausen Switzerland. Loving thought to L.I.N.D.A. BEER and TEQUILA forever !” The message belied the relatively toothless effect of the virus, but the Mandelbrot image was quite startling. 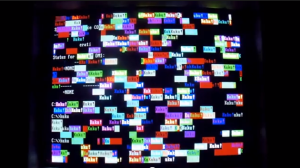 Another DOS virus that created a startling image that would scare the daylights out of anyone concerned with their system’s safety, Kuku produced multi-colored tiles that slowly filled the screen while incessantly blinking the world ‘Kuku!’, which means pick-a-boo in Russian. 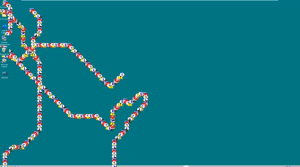 This Windows virus executed on Dec. 22 and executed its payload by ‘drawing’ all of the library of Windows icons in random patterns across the screen. It didn’t directly effect other functions, but made doing anything on the computer difficult simply because of its visual activity. 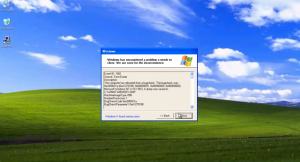 This Windows worm was among the earliest form of fake antivirus programs posing as a security patch that was anything but. Upon activation it displayed a fake error message, opened various standard Windows folders and would even eject the CD-ROM tray. Then it popped up a lengthy rant that read, in part:

“Your computer now is mine, Why? Because I didn’t had nothing to do and I thought, why not make the evil? Remember NOW YOUR PC IS IN MY POWER Windows Sucks! I can’t stand it anymore!” And on and on, singed, ‘KILLERGUATE.’

Unlike a lot of the previous, relatively harmless DOS infections, this one was pretty nasty. It removed the Run option from the Start menu, making it very difficult to remove.