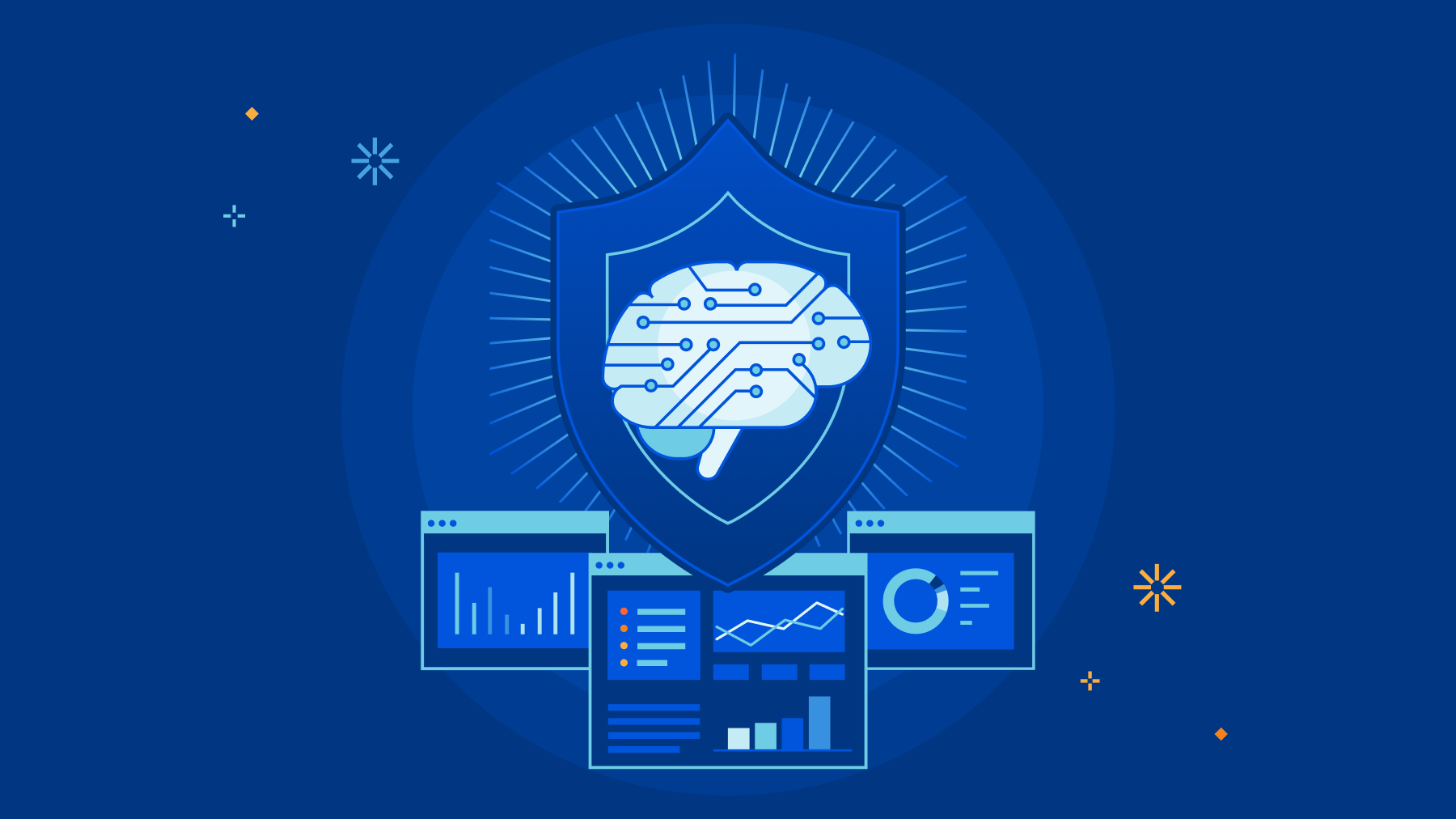 Cloudflare’s WAF helps site owners keep their application safe from attackers. It does this by analyzing traffic with the Cloudflare Managed Rules: handwritten highly specialized rules that detect and stop malicious payloads. But they have a problem: if a rule is not written for a specific attack, it will not detect it.

Today, we are solving this problem by making our WAF smarter and announcing our WAF attack scoring system in general availability.

Customers on our Enterprise Core and Advanced Security bundles will have gradual access to this new feature. All remaining Enterprise customers will gain access over the coming months.

Our WAF attack scoring system, fully complementary to our Cloudflare Managed Rules, classifies all requests using a model trained on observed true positives across the Cloudflare network, allowing you to detect (and block) evasion, bypass and new attack techniques before they are publicly known.

The problem with signature based WAFs

Things become harder with not publicly known attacks, often referred to as zero-days. While our teams do their best to research new threat vectors and keep the Cloudflare Managed rules updated, human speed becomes a limiting factor. Every time a new vector is found a window of opportunity becomes available for attackers to bypass mitigations.

One well known example was the Log4j RCE attack, where we had to deploy frequent rule updates as new bypasses were discovered by changing the known attack patterns.

The solution: complement signatures with a machine learning scoring model

Our WAF attack scoring system is a machine-learning-powered enhancement to Cloudflare’s WAF. It scores every request with a probability of it being malicious. You can then use this score when implementing WAF Custom Rules to keep your application safe alongside existing Cloudflare Managed Rules.

How do we use machine learning in Cloudflare’s WAF?

And this is where we used a Cloudflare superpower: we took advantage of Cloudflare’s network visibility by gathering millions of true positive samples generated by our existing signature based WAF and further enhanced it by using techniques covered in “ Improving the accuracy of our machine learning WAF”.

This allowed us to train a model that is able to classify, given an HTTP request, the probability that the request contains a malicious payload, but more importantly, to classify when a request is very similar to a known true positive but yet sufficiently different to avoid a managed rule match.

The model runs inline to HTTP traffic and as of today it is optimized for three attack categories: SQL Injection (SQLi), Cross Site Scripting (XSS), and a wide range of Remote Code Execution (RCE) attacks such as shell injection, PHP injection, Apache Struts type compromises, Apache log4j, and similar attacks that result in RCE. We plan to add additional attack types in the future.

The payload used in the attack, although not immediately blocked by our Cloudflare Managed Rules, was correctly identified (by scoring very low) by our attack scoring system. This allowed us to protect endpoints and identify the attack with zero time to deploy. Of course, we also still updated the Cloudflare Managed Rules to cover the new attack vector, as this allows us to improve our training data further completing our feedback loop.

Know what you don’t know with the new Security Analytics

In addition to the attack scoring system, we have another big announcement: our new Security Analytics! You can read more about this in the official announcement.

Using the new security analytics you can view the attack score distribution regardless of whether the requests were blocked or not allowing you to explore potentially malicious attacks before deploying any rules.

The view won’t only show the WAF Attack Score but also Bot Management and Content Scanning with the ability to mix and match filters as you desire. 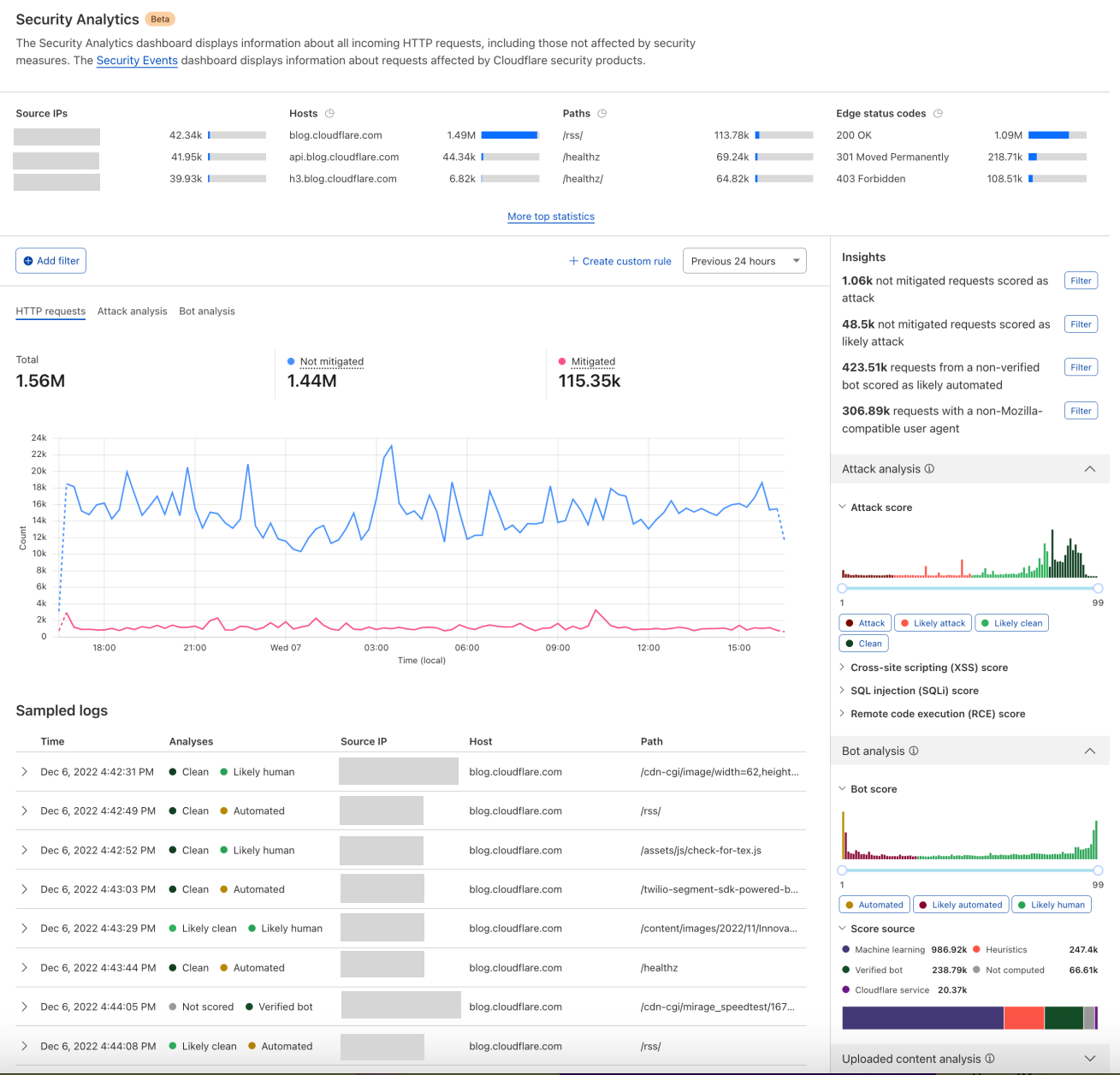 How to use the WAF Attack Score and Security Analytics

Let’s go on a tour to spot attacks using the new Security Analytics, and then use the WAF Attack Scores to mitigate them.

This new view has the power to show you everything in one place about your traffic. You have tens of filters to mix and match from, top statistics, multiple interactive graph distributions, as well as the log samples to verify your insights. In essence this gives you the ability to preview a number of filters without the need to create WAF Custom Rules in the first place.

Step 2 – explore insights: On the new analytics page, you will view the time distribution of your entire traffic, along with many filters on the right side showing distributions for several features including the WAF Attack Score and the Bot Management score, to make it super easy to apply interesting filters we added the “Insights” section.

By choosing the “Attack Analysis” option you see a stacked chart overview of how your traffic looks from the WAF Attack Score perspective.

Step 3 – filter on attack traffic: A good place to start is to look for unmitigated HTTP requests classified as attacks. You can do this by using the attack score sliders on the right-hand side or by selecting any of the insights’ filters which are easy to use one click shortcuts. All charts will be updated automatically according to the selected filters.

Step 4 – verify the attack traffic: This can be done by expanding the sampled logs below the traffic distribution graph, for instance in the below expanded log, you can see a very low RCE score indicating an “Attack”, along with Bot score indicating that the request was “Likely Automated”. Looking at the “Path” field, we can confirm that indeed this is a malicious request. Note that not all fields are currently logged/shown. For example a request might receive a low score due to a malicious payload in the HTTP body which cannot be easily verified in the sample logs today. 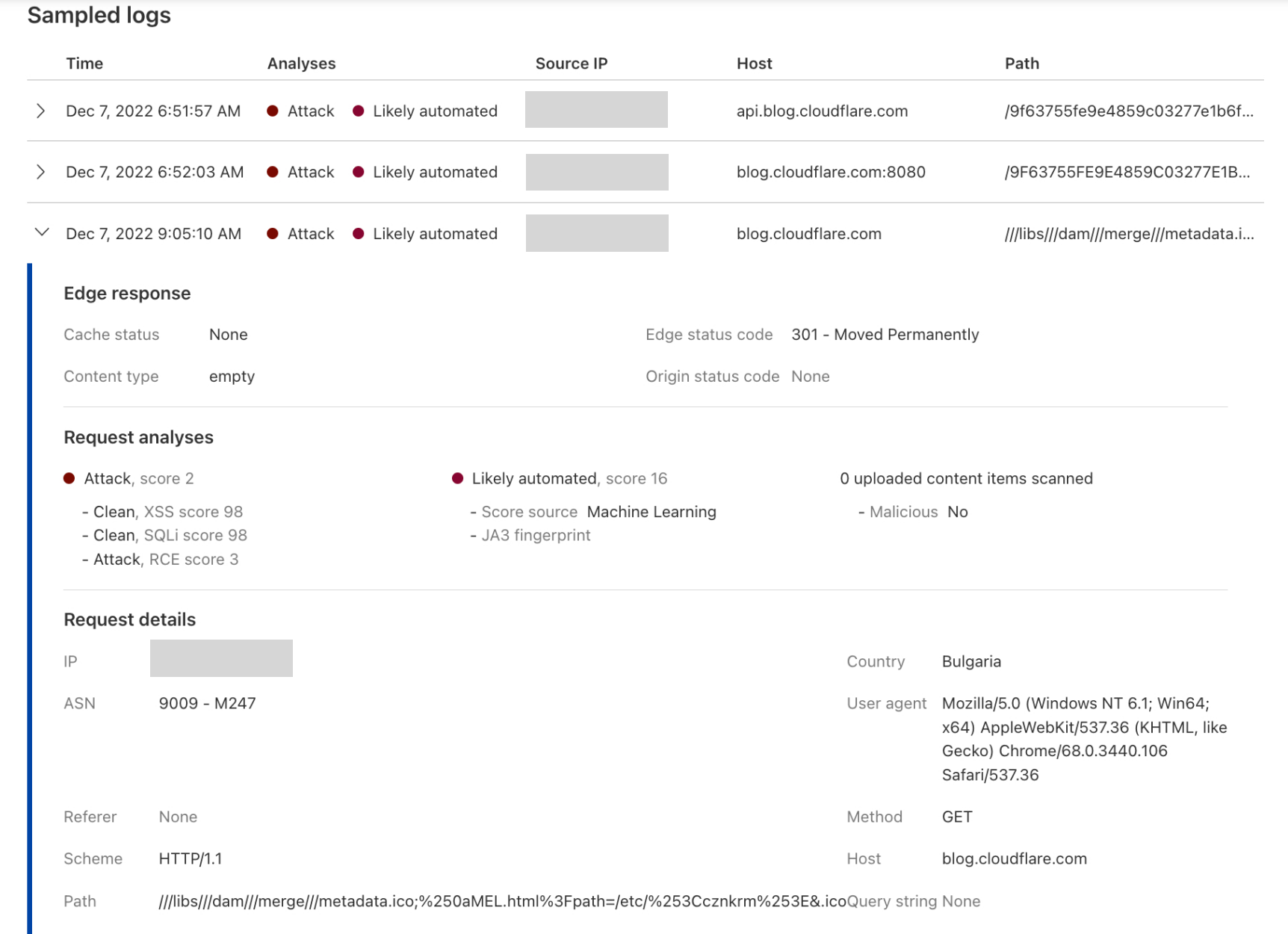 Step 5 – create a rule to mitigate the attack traffic: Once you have verified that your filter is not matching false positives, by using a single click on the “Create custom rule” button, you will be directed to the WAF Custom Rules builder with all your filters pre-populated and ready for you to “Deploy”.

WAF Attack Scores are also available in HTTP logs, and by navigating to (Security> Events) when expanding any of the event log samples: 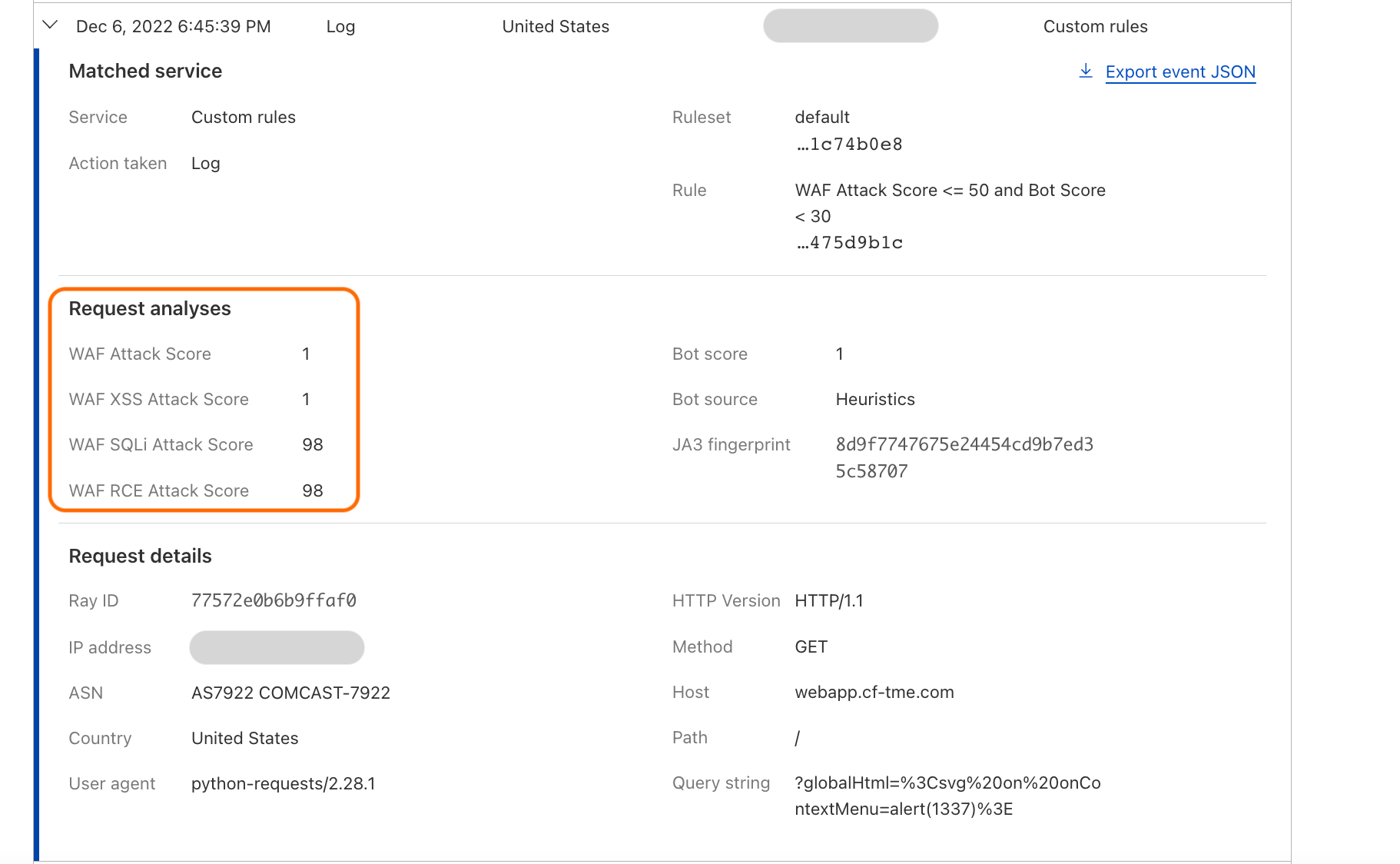 Although the easiest way to use these fields is by starting from our new Security Analytics dashboard as described above, you can use them as is when building rules and of course mixing with any other available field. The following example deploys a “Log” Action rule for any request with aggregate WAF Attack Score (cf.waf.score) less than 40. 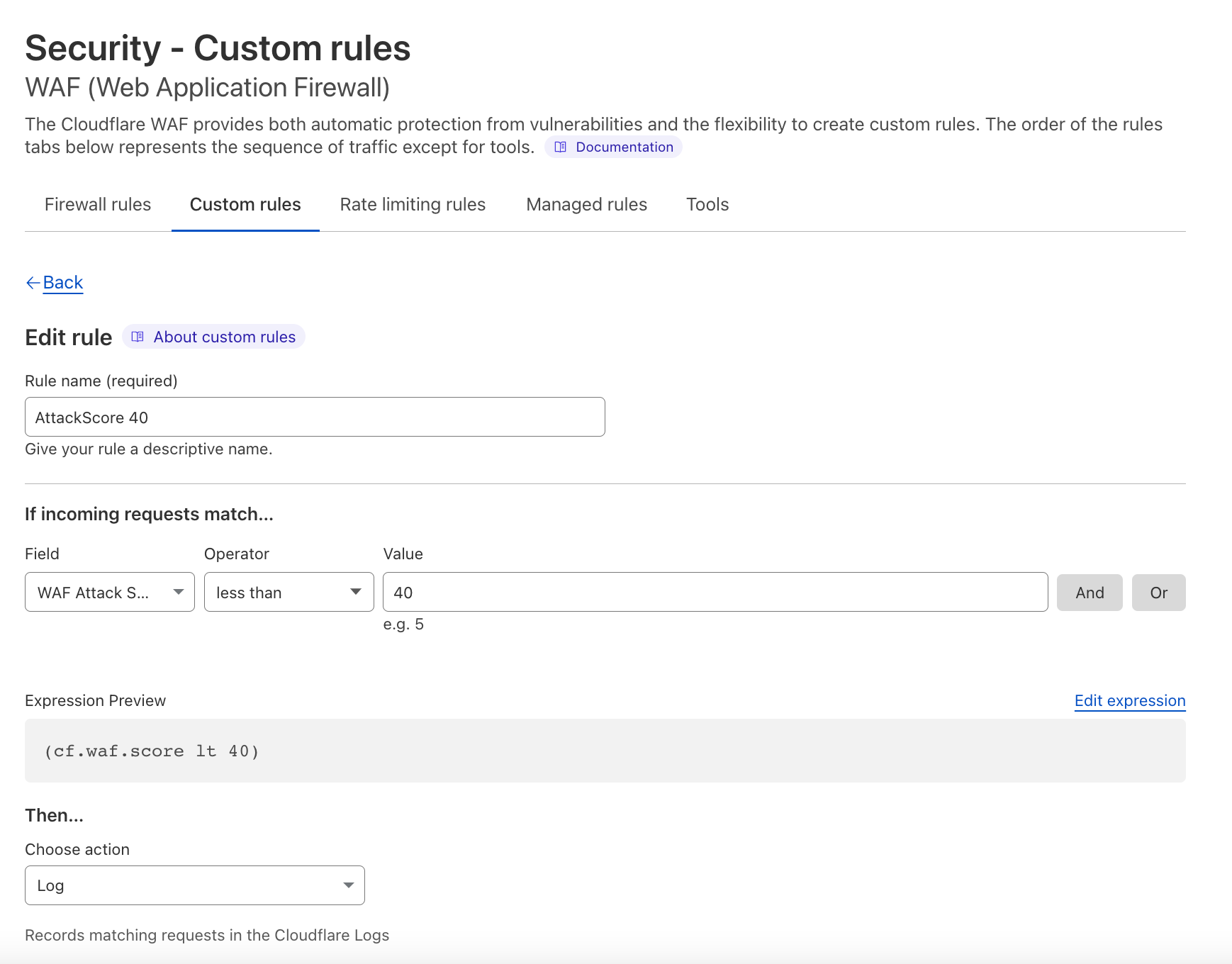 This is just step one of many to make our Cloudflare WAF truly “intelligent”. In addition to rolling this new technology out to more customers, we are already working on providing even better visibility and cover additional attack vectors. For all that and more, stay tuned!